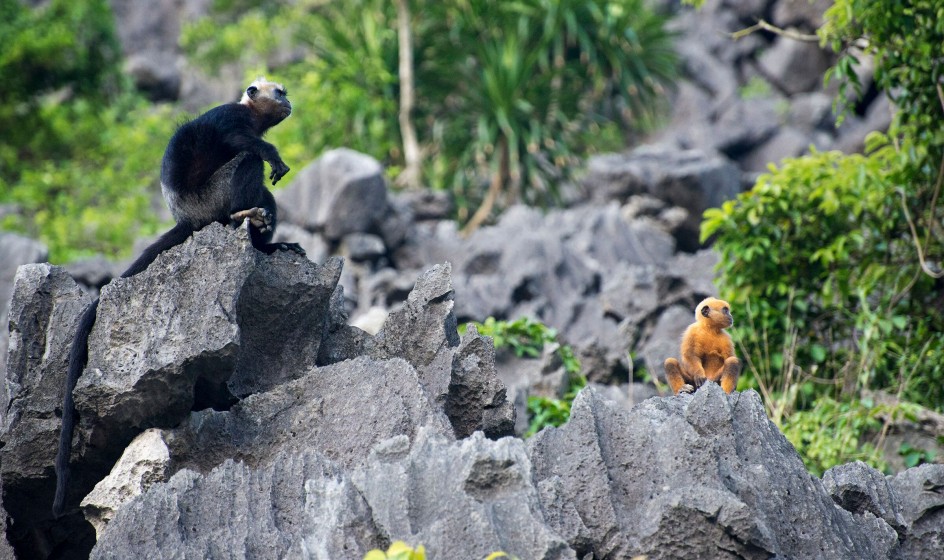 The last of their kind – the Cat Ba langur

The Cat Ba Langur (Trachypithecus poliocephalus) is known only from Cat Ba Island, in Ha Long Bay off the northeastern coast of Vietnam.
Since the 1960s, the Cat Ba Langur has experienced a massive population decline of up to 98%. With an estimated original population of 2,400-2,700 individuals, the total population in 2003 dropped to only 53.
The Cat Ba langur is classified as Critically Endangered on the IUCN Red List, and since 2000 the species is listed as one of the 25 most endangered primates in the world. Poaching for meat and traditional medicine has been recognized as the most severe threat to Cat Ba langurs. Other threats include habitat destruction and fragmentation due to shrimp farming, road construction, and urbanization and massive tourism.

Aims of the project are:

Protection of the forested limestone hills and cliffs and reforestation of mangroves, in order to protect and connect the langurs’ habitat and to conserve the archipelago’s unique biodiversity as a whole

Decrease and Management of the pressure through mass tourism

The Cat Ba Langur Conservation project (CBLCP) was initiated by Munster Zoo and the Zoological Society for the Conservation of Species and Populations (ZGAP), both form Germany, in 2000. Since 2019 the project is sponsored by its German partner Zoo Leipzig. The project has been supported regularly by Stiftung Artenschutz since its start.

Our support for 2020/2021 especially targets the patrols that work for the langurs’ safety. In order to let them work effectively, the patrol teams need suitable equipment, regular training, and their salary. Stiftung Artenschutz supports these costs.